“It gives me dignity.” Those were the words of one of the young men we have with us on the farm when asked why he liked coming along. When I heard that I was blown away. What an amazing testimony to the dedicated and loving work done by every one of our volunteers and staff.

In a world where people who may be a little different do not receive dignity every day it was a fantastic thing to hear that we are breaking that mould.

A few weeks ago we had the privilege of welcoming Jon Wright (BBC Radio Suffolk) along to the farm for a look around. He kindly did some interviews and, if you missed the live broadcast, you can click on the image above and see and hear some of the results. Thanks Jon, we really enjoyed your visit… come again.

The wind started to get up last week, especially on Thursday when we had a visit from Doris!

We lost a few roof tiles (those old clays are incredible and I can’t believe they stay up during most storms let alone a mini hurricane), and somehow, the toolshed moved away from the wall but the biggest shock came when Geoffrey (our lovely billy goat) was startled by his wooden shelter being blown over… his wooden shelter that took six people to carry it into position in the first place.

Fortunately, he was not that close and only his pride was hurt as he left about in panic for a few minutes… he quickly worked though that this arrangement made it much easier to get to the hay. 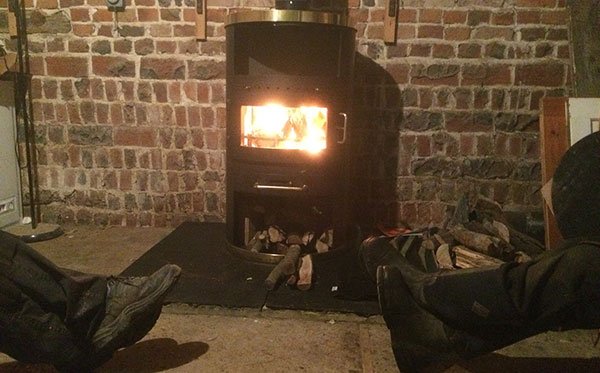 Not only do we have some of the best volunteer help available anywhere but there are also some very generous individuals and companies around who donate things to the farm eg two log burners and a number of kitchen units!

As you can imagine, the farm can be a little exposed to the elements at times and heating the barns has not been easy. However, thanks Dennis & Jane and Rob & Karen for the wonderful gifts of the stoves and thanks Bernie and Howdens for the kitchen units. Wow, what a difference… not only are they all functional but they also look great and really add to the ambience. 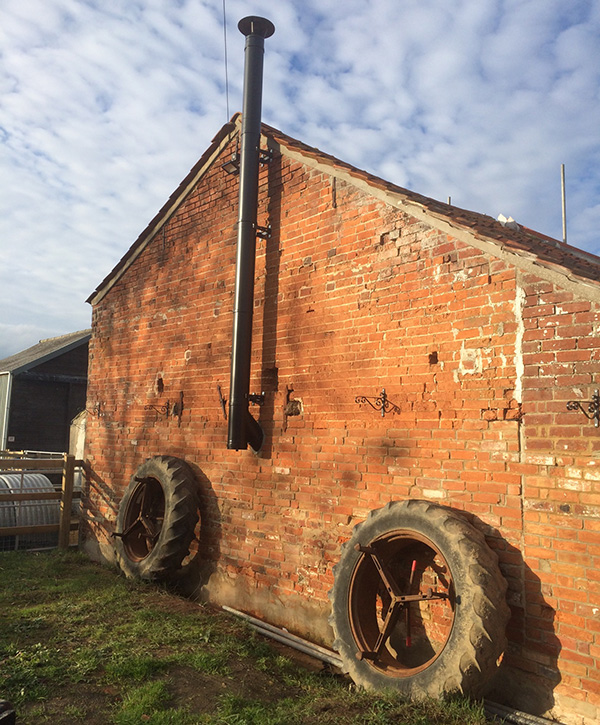 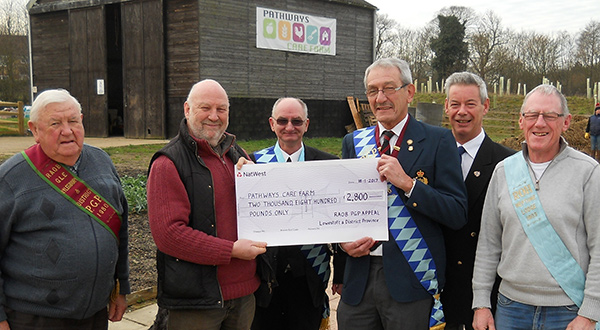 One flue over the cuckoo nest

So, we have a couple of new flues… It has been wonderful to have two log burners in situ. They almost make the rooms feel warmer just by being there. However, they couldn’t actually give us any heat until they were ‘plugged in’. We needed to have flues fitted, double lined flues as well as we have no chimneys.

Robert and his team at District Flues gave us a ‘charitable rate’ for doing the work and then went a step further by renovating both stoves to look like new. They did a great job, they were always polite and cleared up well at the end… what more could we ask. Thanks guys.

Of course, this amount of work was going to leave a bit of a hole in our budget but then along came the Buffs. Ted Espindola was the Provincial Grand Primo last year and chose Pathways as his charity. They kindly raised money for us throughout the year and, just when we needed to pay for the flues, they came to present us with a rather large cheque (see below). A couple of days later the Lowestoft Ladies Hockey Club also wanted to give us the money they had raised… the combined total of these two donations matched – £ for £ – the outlay for the flues! What a coincidence.

A lot of muck spreading has been done over the winter months and we have been developing some new beds to grow veg this year… One of the comments you now hear regularly on site is: “We are starting to look like a farm.”

Last year’s produce was good but we are expecting great things this season… what with expectant goats and lots of fruit and veg to look forward to – its going to be a great year.

Of course, the real work that we do is people centred. The growing and the animals are there for the benefit of our service users. The photo above thrills me and fills me with such joy. This is what its all about… two lovely men, relaxing and having a chat over a cuppa… they didn’t know each other until a few weeks ago but now, as with most people who come along, they have made new friends and really look forward to their day with us. What a privilege to be able to work with such wonderful, wonderful people.

You’ve lived through Doris now meet Flora. Flora is a British Lop Eared and she is adorable. Such a friendly and approachable pig. She will make a lovely addition to our small but growing farm family.

We are having work parties on the first Saturday of the month this year. Hence, the next one is on Saturday 4 March and we will be around from 10am. Please come, if you can make it we would love to see you.